We build advanced technical projects as a team.

< Back to all projects 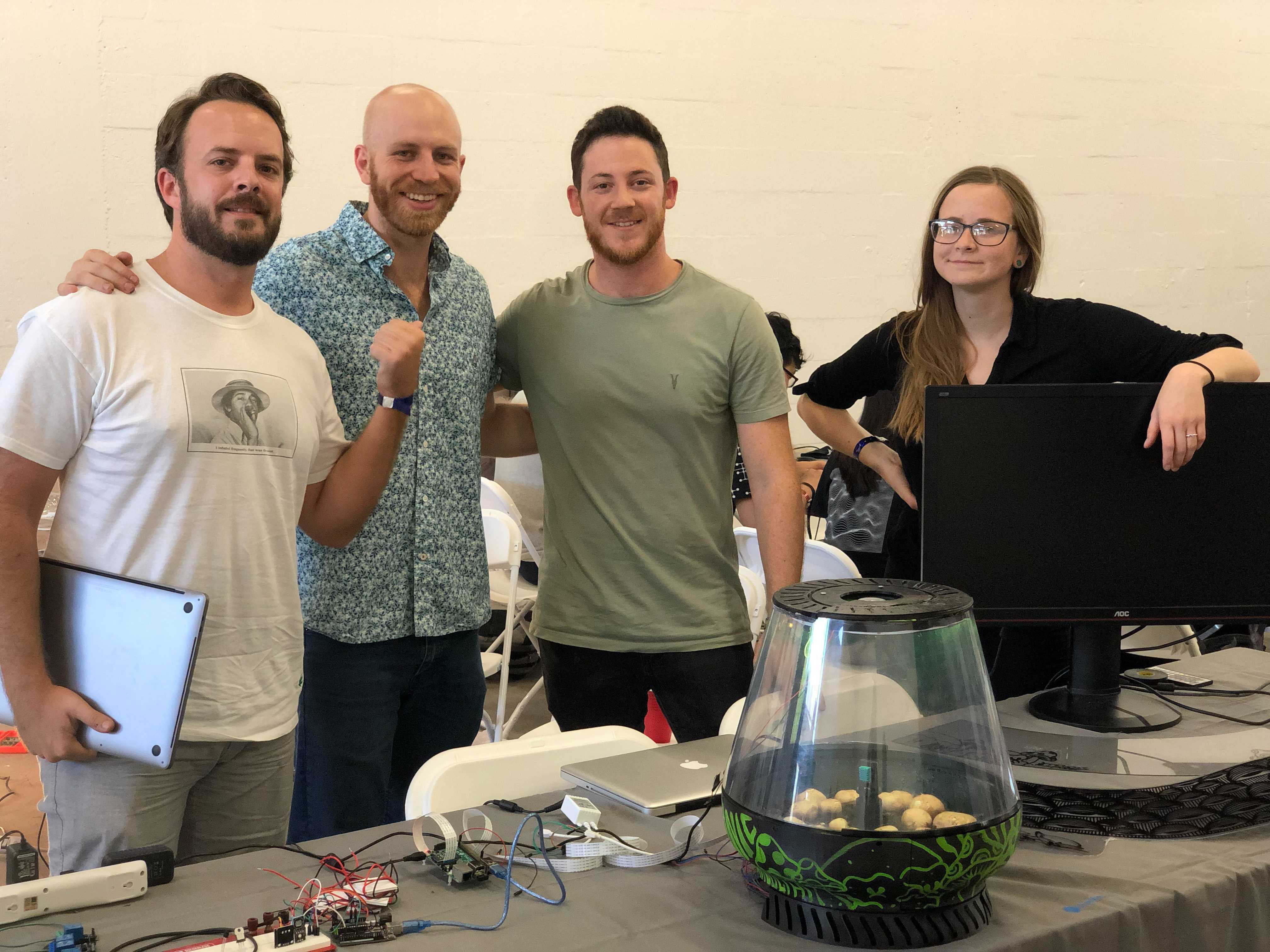 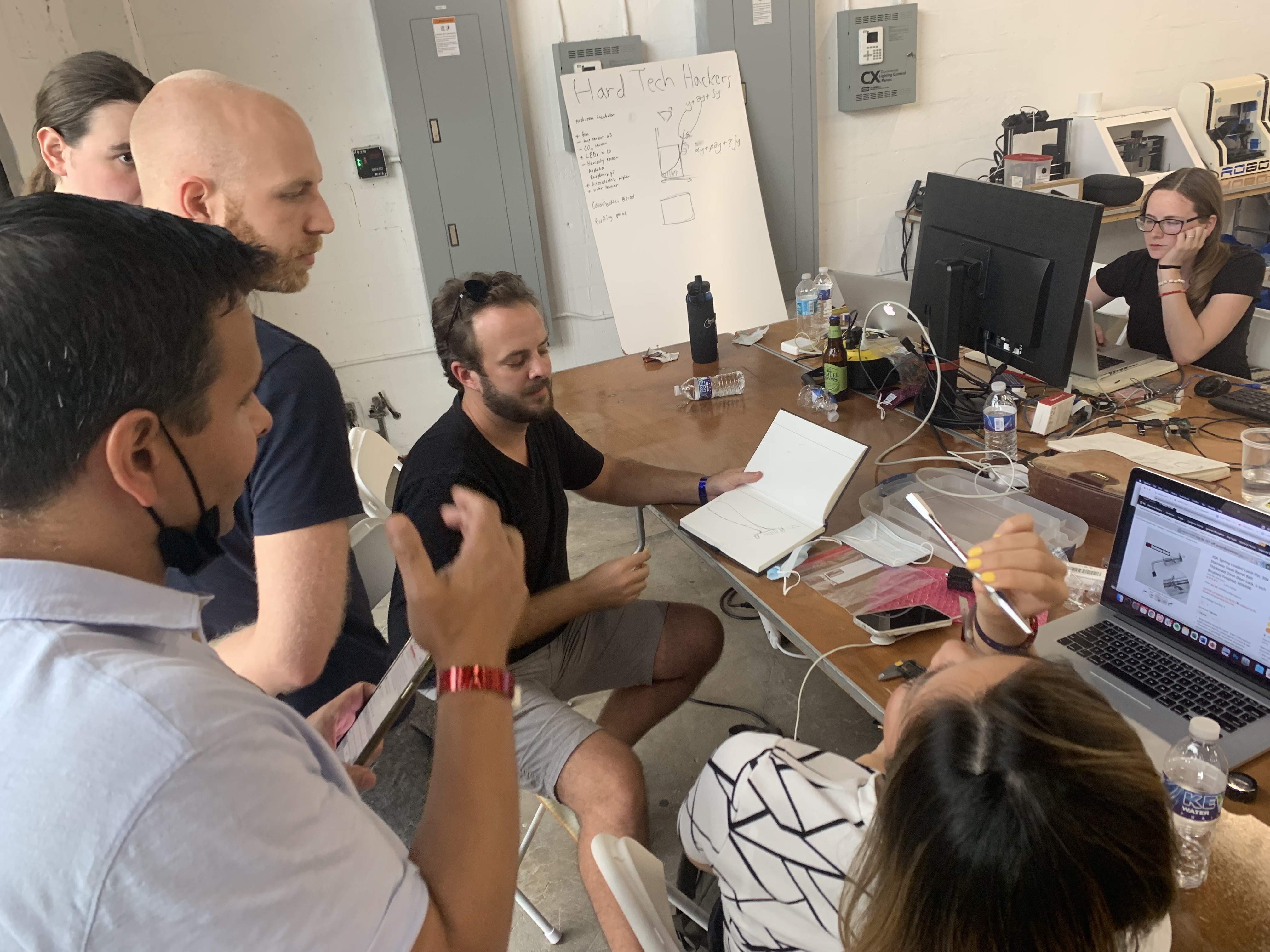 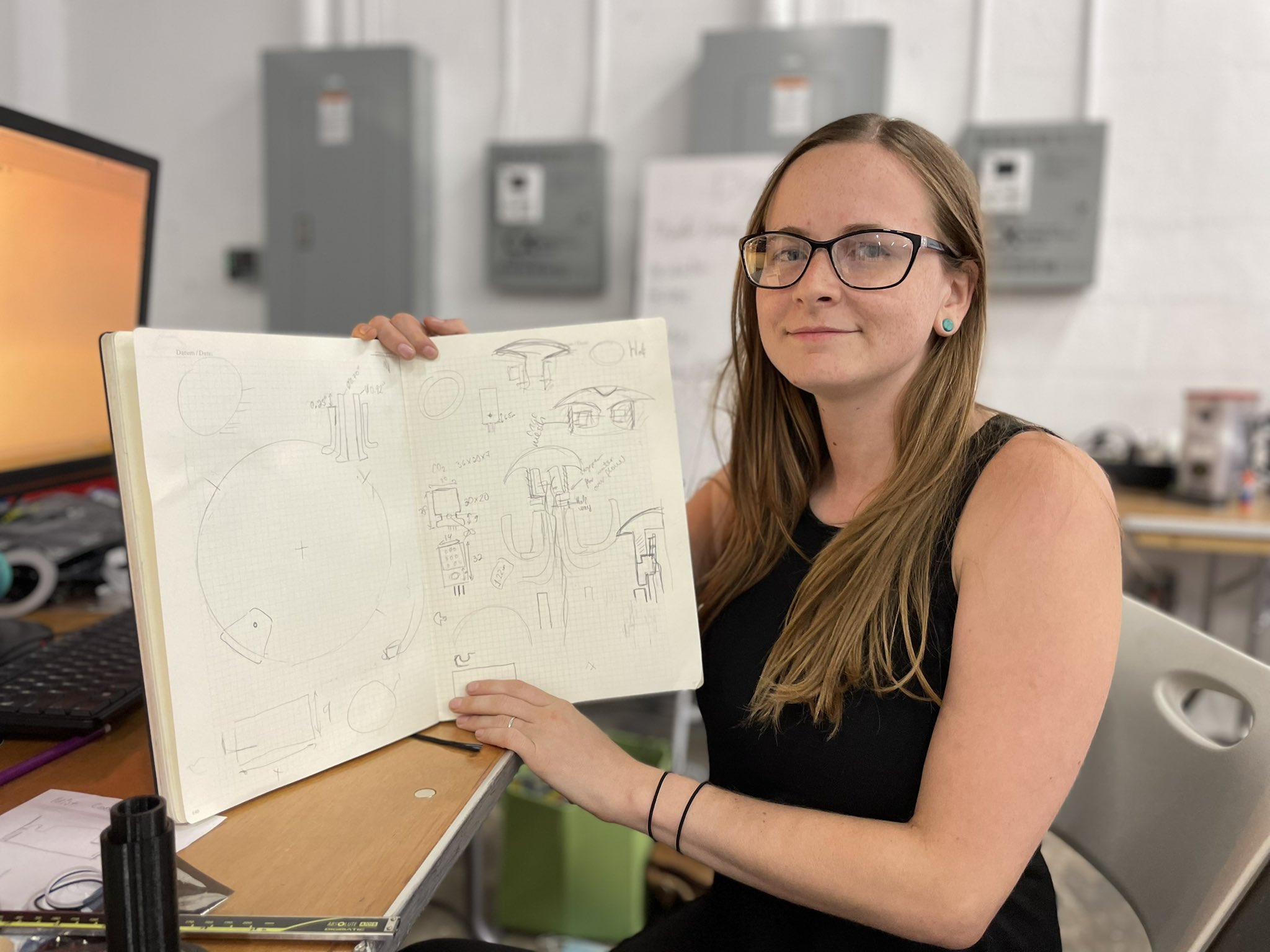 We built an automated microclimate for food production, starting with mushrooms, which are notoriously difficult to grow. Our system can be broken down into a few components:
‍
- Industrial designed and 3D printed enclosure to house the microclimate
- Environmental control through sensors and actuators, PID loops
- CO2 control loop using a CO2 sensor and fan
- Temperature range control using a combo of temp sensors, water heater, and peltier modules
- Humidity control through humidity sensor and piezoelectric humidifier
- Lighting control through an LED on/off control loop
- Machine learning to automatically understand how to optimize the system
- Basic computer vision for growth stage recognition Web app to monitor the stages of production

The models were created in solidworks fusion and onshape, renders were made in keyshot, and circuits were designed in kicad and eagle.

You can see the presentation we used for the hackathon here. 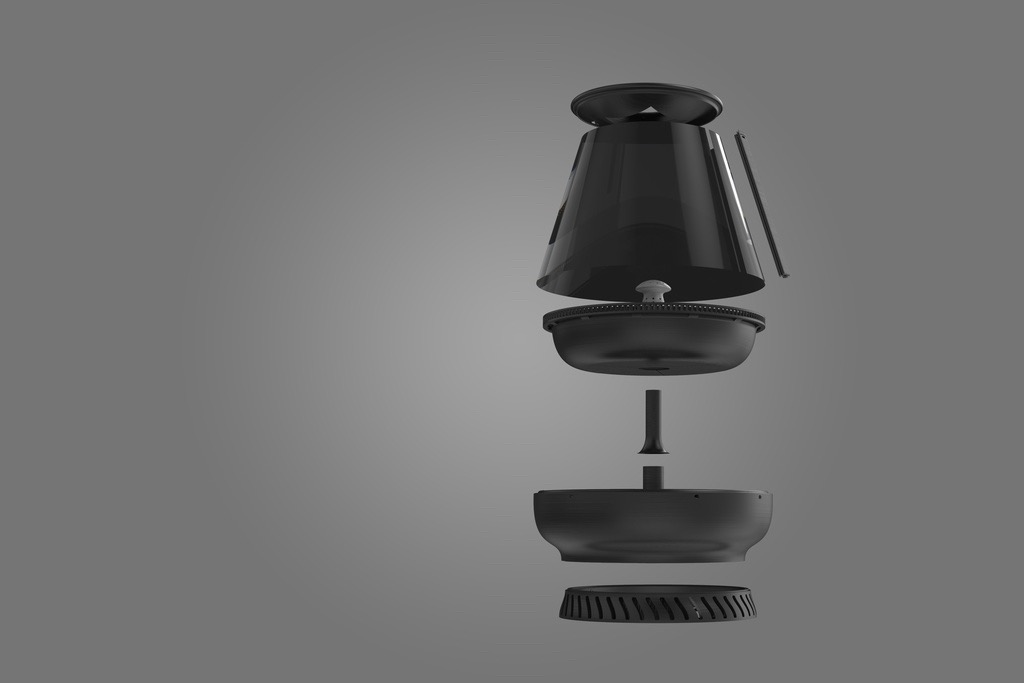 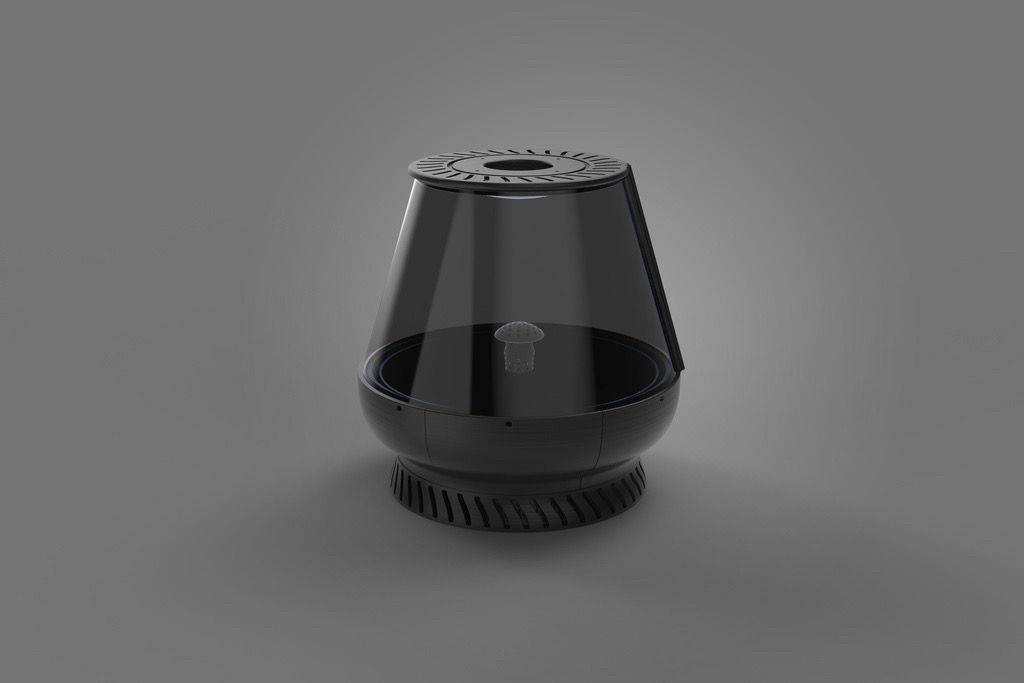 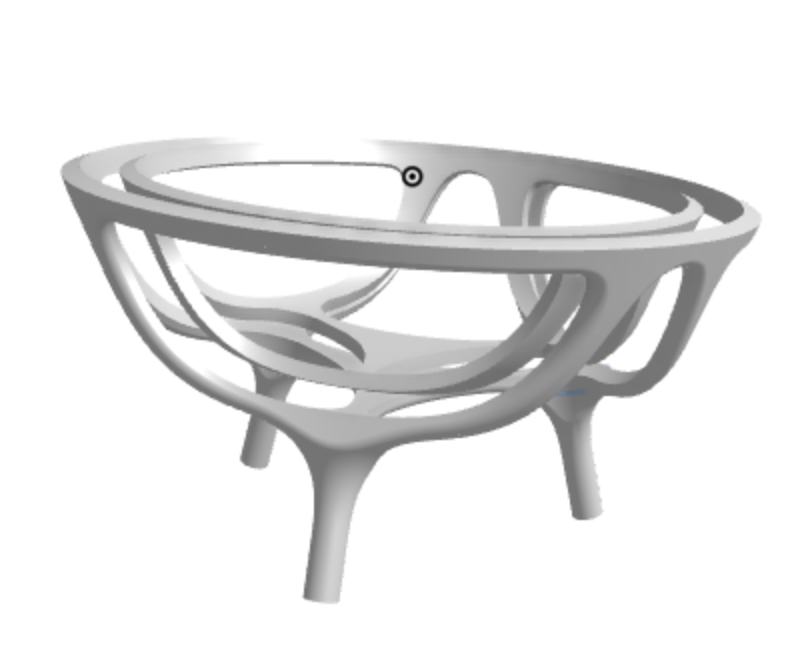 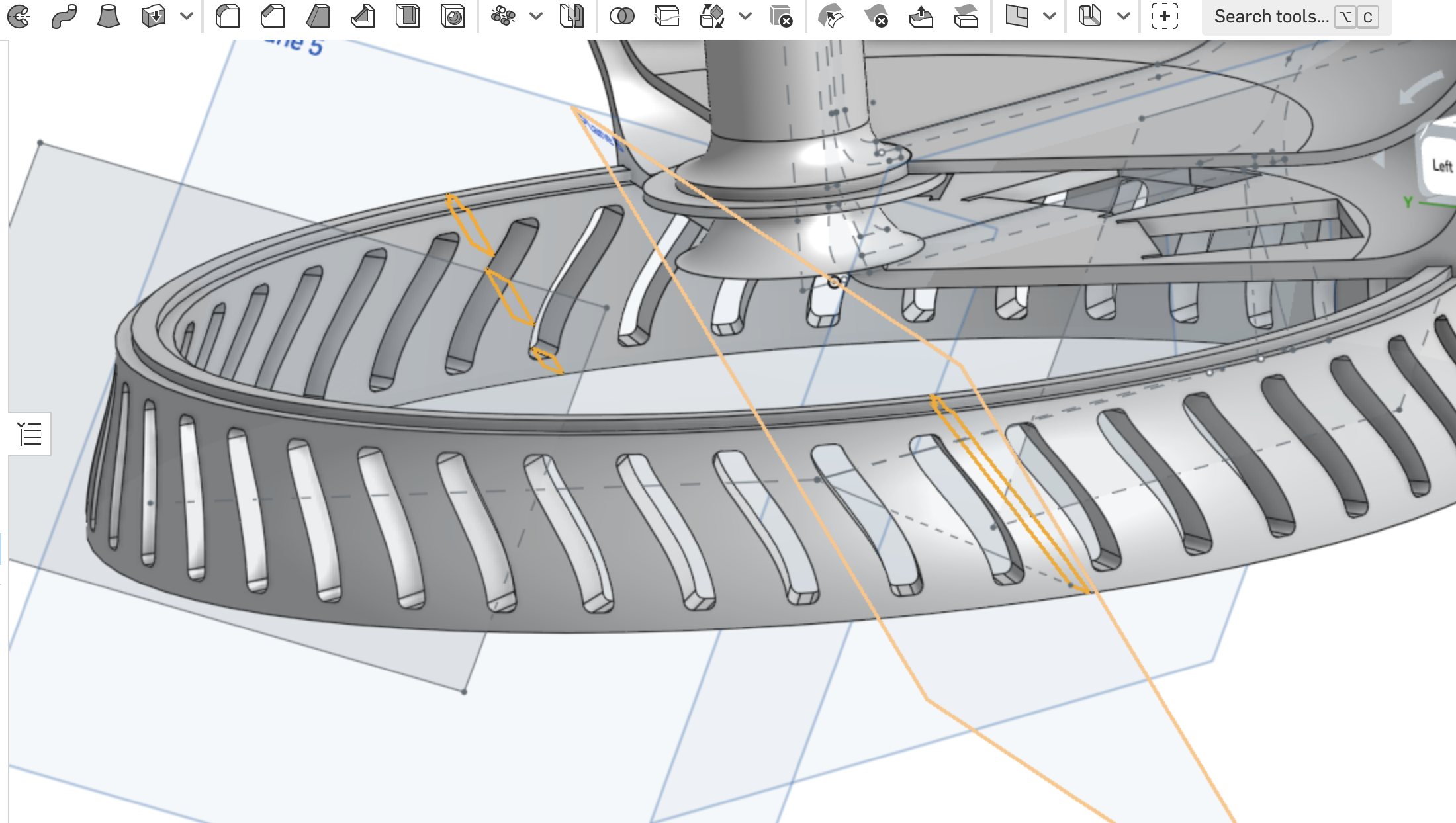 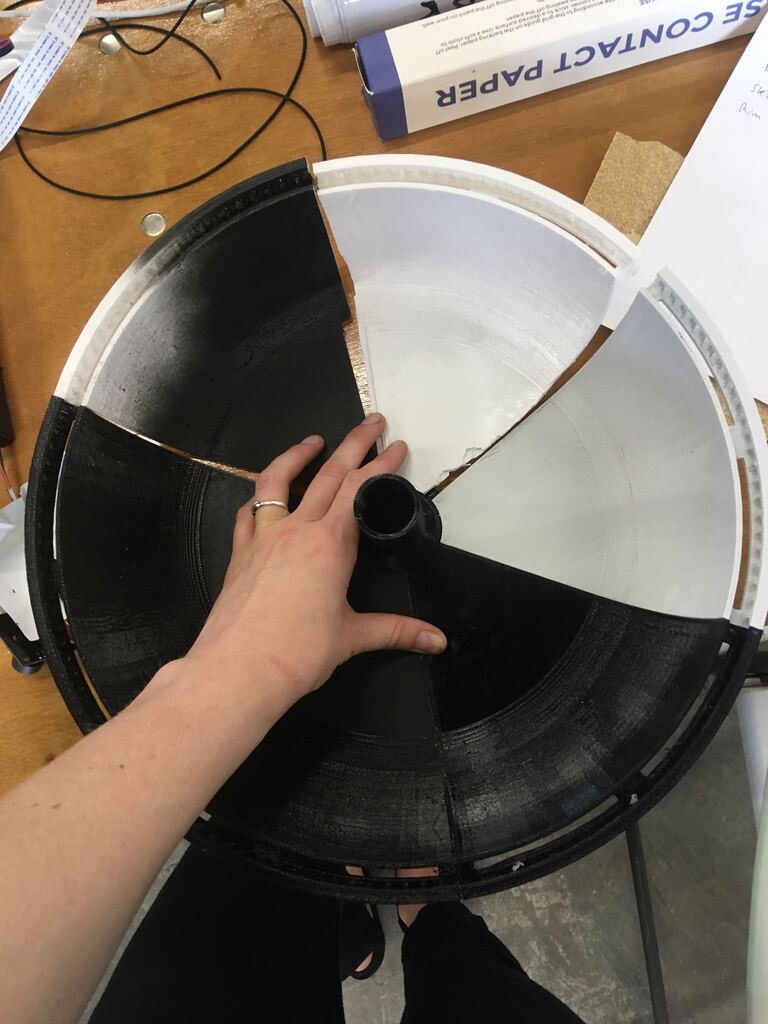 - 3D printed parts failed (badly warped)
- Needed to split the 3D printed model in a particular way but CAD software wasn’t playing nicely
- Getting supplies
- Figured out how to get large piece of acrylic for the see-through display and then wrap, rather than use an off-the-shelf component which would take too long to acquire and would be expensive

Cultivating mushrooms is a difficult undertaking. Fungus is a type of mold, and the conditions required to grow the kind you’d find in a gourmet restaurant are also favorable to the kinds you wouldn’t want to look at, much less eat.
‍
Sterility is a core requirement for having a successful grow, but the process from beginning to end is complicated, with many possible points to introduce contaminants.
‍
dSilo aimed to solve that problem by creating an automated microclimate, removing the need for opening the grow area to the outside environment and possible failure.
‍
Although this is good and necessary, simply creating an automated microclimate won’t bring mushroom growing to the masses. Consumers still need to educate themselves on the steps required to get to the point of incubation, source the materials from various vendors, and successfully execute. The barriers to entry are still quite high. 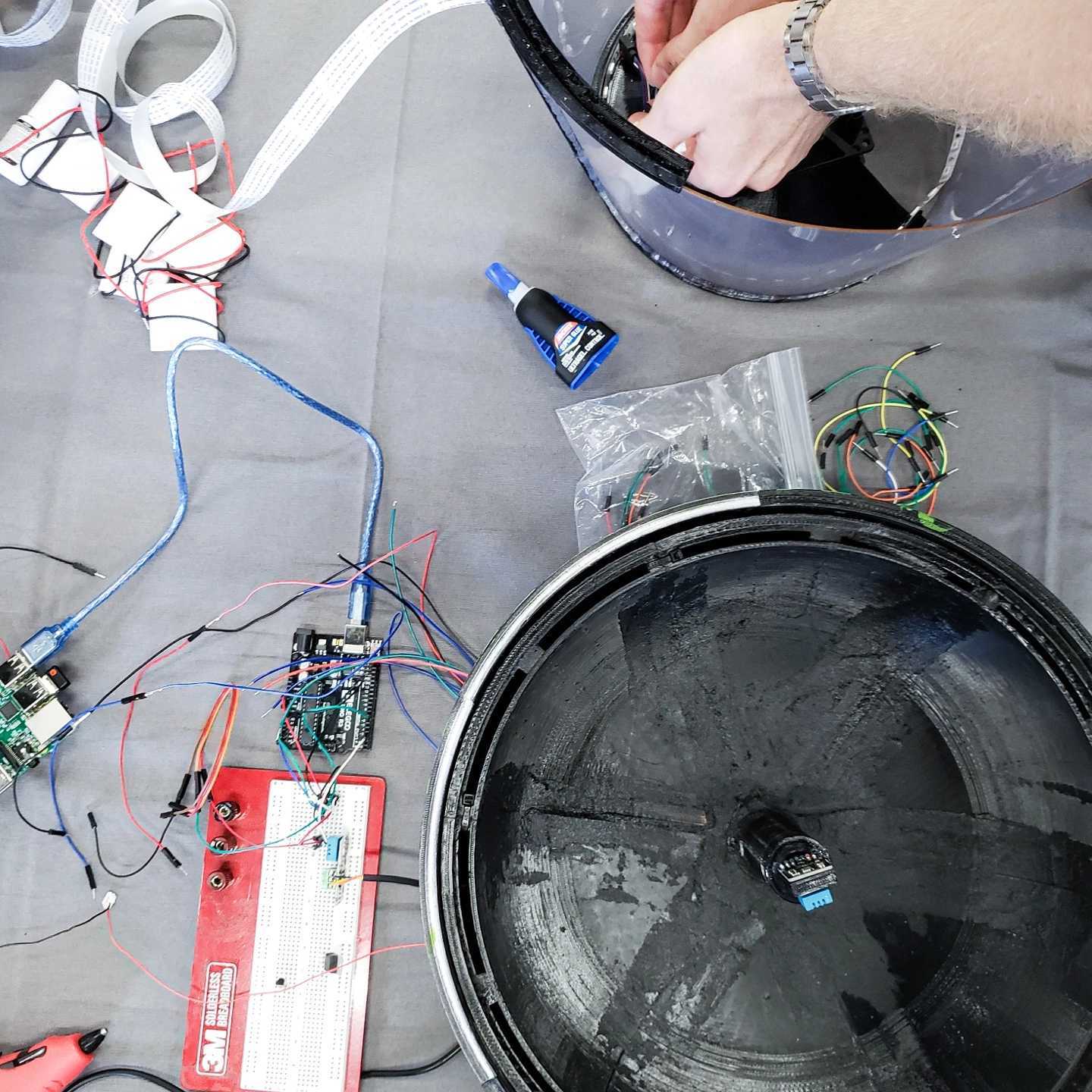 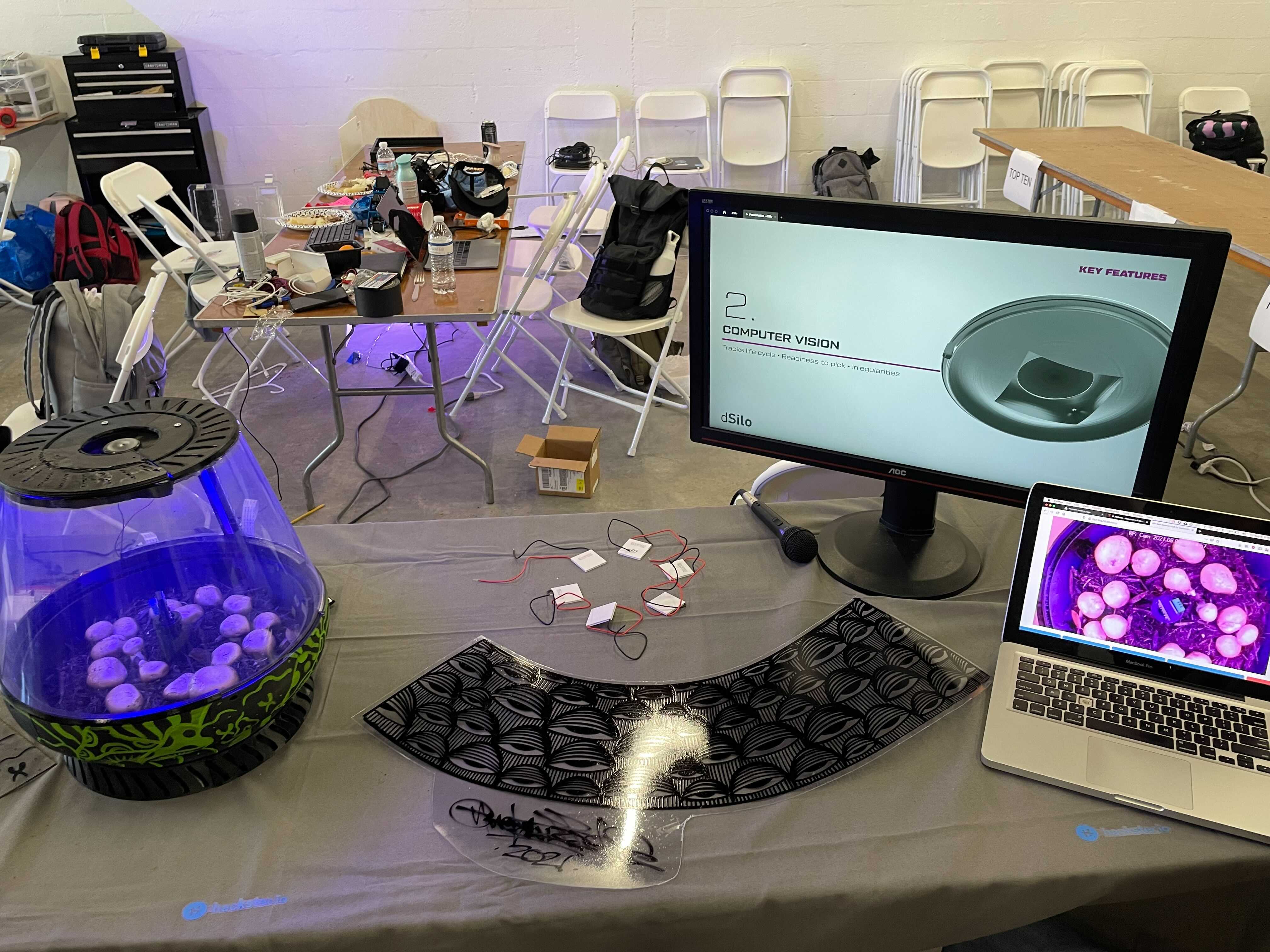 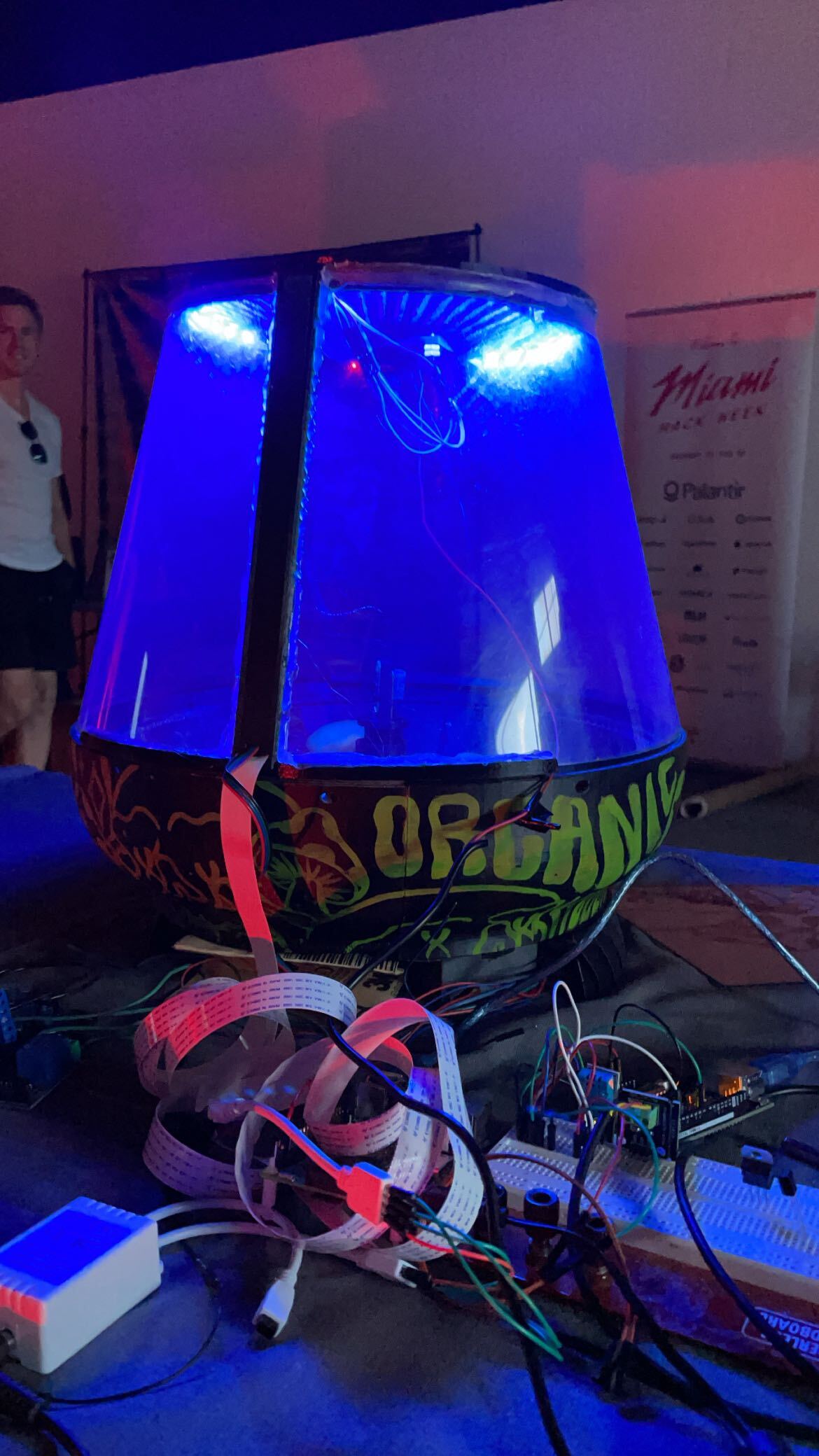 Scoped out for a week-long development project, dSilo aimed to play a limited but very specific and useful role in reducing this burden. It involved a few elements:
- a repeatable process that inspired trust and confidence
- An industrial design language and product positioning that matched the culture of growing mushrooms
- A fun and visual growing experience designed to go viral
- A designed data network effect to create stickiness and improve the value of the network
‍
For a time-boxed window of time like MHW, the bottoms-up, consumer device approach that included the above features was feasible. The idea was that an adopted consumer standard for growing mushrooms, similar to how Keurig created the K-cups for coffee, would incentivize mid-scale mushroom growers to produce ready-to-grow pods for the consumer unit, fixing the fragmentation of the market. This would start with early adopters and enthusiasts training seeding the automation ML models with successful grows, paving the way for consumer adoption and mid-scale growers to supply pods. A two-sided marketplace consisting of mid-scale suppliers and consumers is a natural end goal for dSilo.

These mid-scale growers have their own problems to deal with, something we could and maybe should go after. This segment of the market would benefit from automation seen in industrial-scale grows, but be better positioned to move product for a very key reason: mushrooms have a very limited shelf life. Unlike apples which can circulate in the food production system for 14 months, mushrooms have days to be sold, and markets that sell produce simply won’t buy mushrooms that look ugly. This is why you see a limited number of mushroom varieties.  Local sellers have an undeniable advantage here  and decentralization, or dSilo-ing production will be the only way to solve the distribution issue.

Margins for hardware are high and considerably higher for the consumables’ material. Working out supplier deals with large material suppliers, dSilo could pass on savings to both sides of the market while still charging a percentage of the transaction.

With standardization of growing conditions and a platform to share outcomes, the possibility to publicize and monetize new genetics are high, adding to the value of growing with dSilo. Research institutions can pay users to follow protocols, communities can be built organically by sharing snapshots of grows, and the future of grown mycelium materials can be had in the home. The infrastructure built for dSilo can be utilized in many ways, opening up various business models and improving durability to the brand.

The dSilo project is continuing development. If you are interested in getting involved in any capacity, reach out, and if you want to work on projects like this, join us! 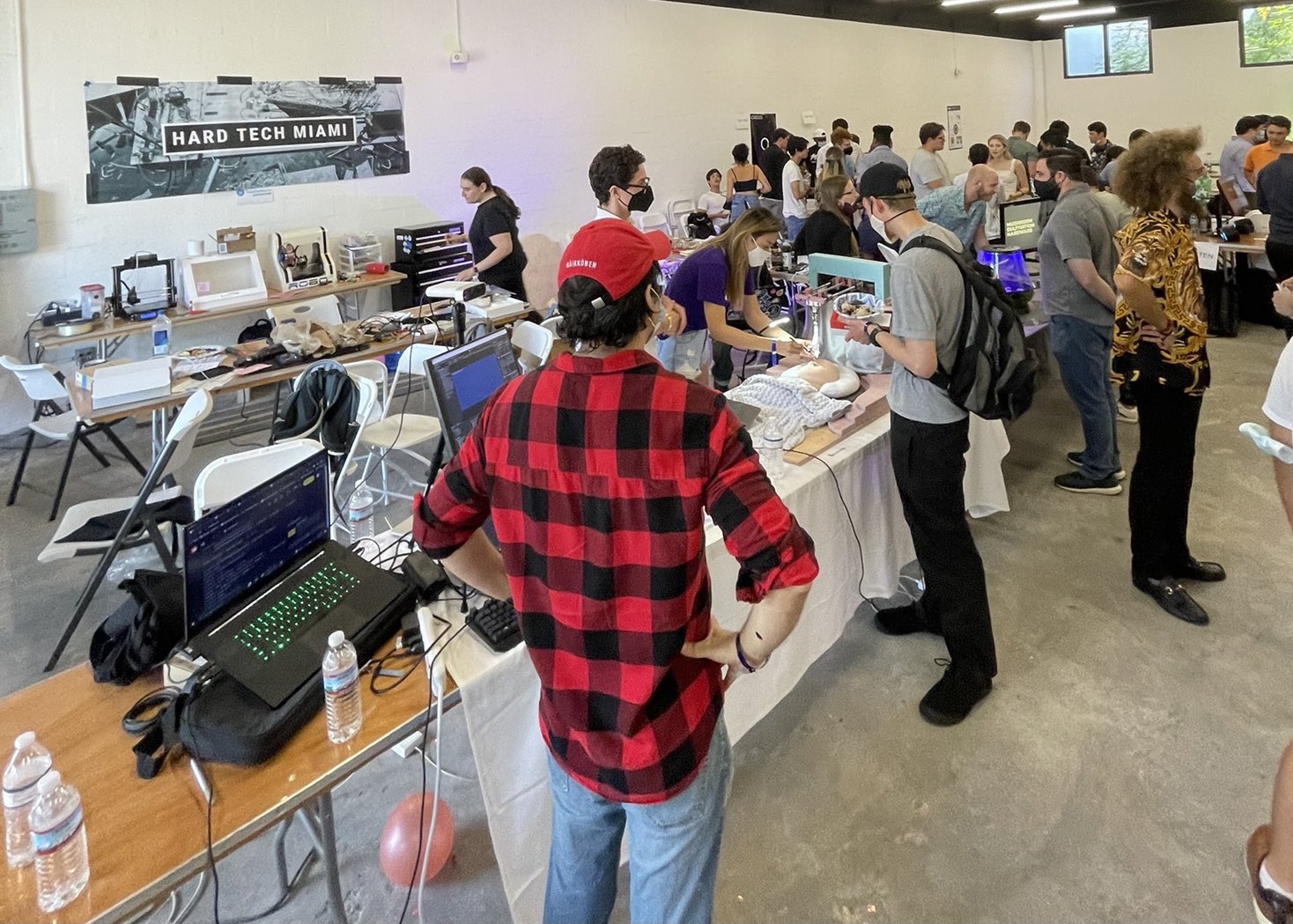 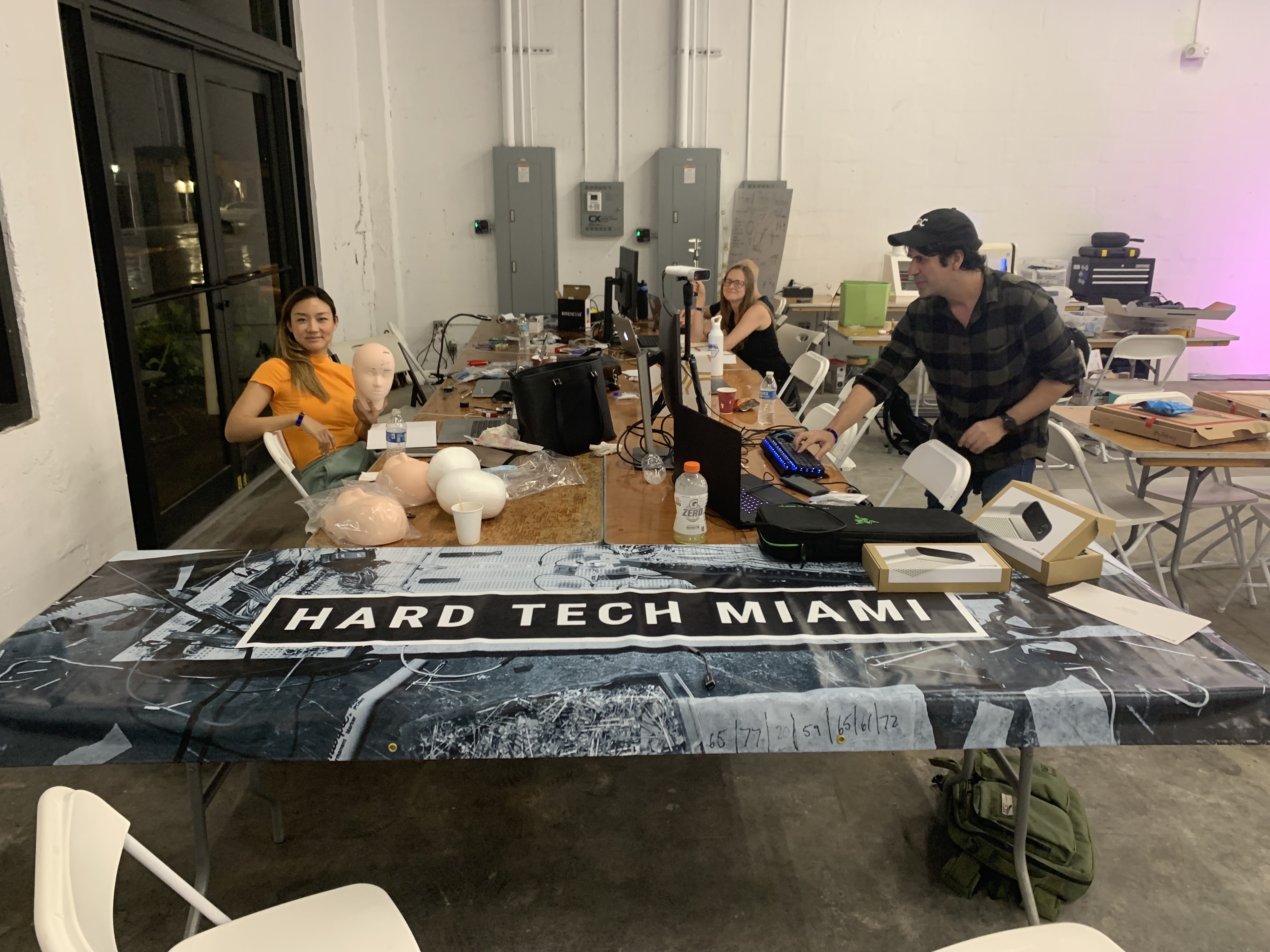